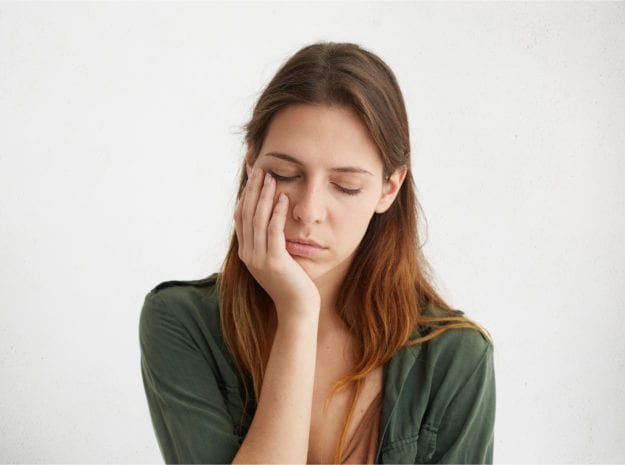 WAKE UP TIRED SKIN: FIVE COMMON WAYS THE SKIN RESPONDS TO LACK OF SLEEP, AND WHAT YOU CAN DO ABOUT IT

If you thought yawning your way through a meeting was the only tell-tale sign of a night spent counting sheep, you may be sadly mistaken.

As your body’s largest organ, your skin also visibly tells those around you when your day is sponsored by a triple shot latte rather than a good night’s rest.

While the signs of tiredness on your skin may worsen over time, even one disturbed night can lead to giveaway signs of a poor night’s rest.  But, fear not, even if the Sandman hasn’t been paying regular visits recently, it doesn’t mean your skin has to suffer!

Here are some of the more common ways lack of sleep shows in your skin, and what you can do about them.

1)Dark circles under the eyes

Dark circles are the first and most immediate sign that you’ve had a bad night’s sleep.

Just one poor slumber can give the appearance of shadows under the eyes that tell everyone you didn’t catch enough zzzzs last night.

Dark circles appear when the skin under the eye area thins leaving blood vessels exposed. While it can be tempting to cover dark circles with makeup, this can often highlight the problem further.  The most effective solution lies in plumping up the delicate area to make skin cells thicker.

After a night of broken sleep, you might notice that skin is more dehydrated than usual no matter how much you moisturise.

Lack of sleep can reduce the skin’s natural PH levels affecting moisture production. As a result, you may develop more of a reliance on hydrating serums to hydrate dry patches.

Tired skin tip: While you might be tempted to reach for a caffeinated beverage such as coffee or a sugary soft drink, after a night of broken sleep give dehydrated cells a much-needed helping hand by drinking lots of still water. Add a slice of lemon to help restore PH levels and increase natural hydration further.

Tired skin tip: Keep dead skin cells moving by using a gentle exfoliant two to three times a week. Daily use of a gentle enzyme exfoliant (such as Bd serum which is a natural source of tartaric acid), will break down the protein bond that stops dead skin cells from clearing and will control oil flow to promote healthy cell turnover

Little or broken sleep can trigger a stress response in the body leading to excess cortisol (the stress hormone) production. Cortisol can cause inflammation in the skin which displays as sensitivity including redness, tingling and itching.

Further, when the skin’s PH levels drop (as it does with lack of sleep), so does the skin’s ability to fight against bacteria which can also increase the likelihood of sensitivity.

During sleep, the brain rids the body of toxins so if you’re failing to catch those elusive zzzzs, you may be storing toxins in the skin which can damage the barrier function further making it more sensitive to environmental toxins.

Tired skin tip: Nourish, protect and repair the barrier function by removing potential allergens including fragrance from your skincare regime to reduce the signs of sensitivity. Repair barrier function with daily use of Bf serum which is a natural source of tryptophan, the alpha amino acid that helps strengthen protective cells.

If you’ve ever heard tired parents blame lack of sleep caused by the kids for premature ageing, they might not be wrong!

Melatonin is the hormone produced during slumber which provides anti-oxidant defence against free radicals that bounce around in the environment causing premature ageing of the skin.  If melatonin slows down, which it does when you’re awake, so does necessary protection which can lead to premature ageing and fine lines.

Tired skin tip: Always wear sunscreen. While sunscreen doesn’t protect against free radical damage, it does protect against harmful UV rays which are also factors in premature ageing. Couple this with daily application of a nourishing serum containing gallic acid (such as Bd serum). The naturally-occurring phenolic acid strengthens cells and provides a natural defence against free radicals found in the environment.

To prevent the ‘you look tired’ comments every time you greet someone, treat the signs of lack of sleep on a deeper cellular level rather than trying to cover them once they appear. If you can’t get a good night’s sleep, use natural skincare products like Biologi. The whole range of single-plant-ingredient serums is 100% active and hydrate and strengthen skin cells rather than simply covering up the signs of lack of sleep once they appear.

Biologi serums are multi-use, so while the active ingredients repair the signs of lack of sleep, they also work to hydrate, nourish and slow the visible signs of ageing.